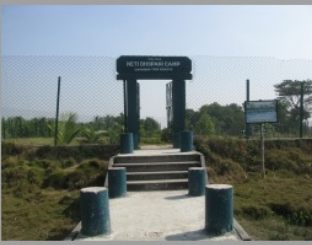 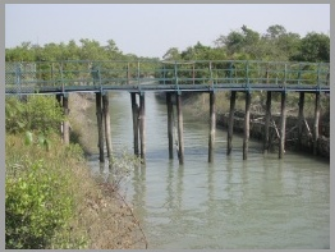 Netidhopani Watch Tower is another watchtower in the series of several watchtowers and is associated with the legend of Behula and Lakhindari. Legend has it that Behula, while accompanying her dead husband on his last journey on the boat, was passing the bank of what is now called Netidhopani, saw an interesting thing.

A woman was washing clothes and a child was continually disturbing her. Annoyed, she sprinkled some water on the boy. The boy became lifeless. The woman finished her laundry and then again sprinkled some water on the boy, chanting some mantras, to bring him back to life. Behula decided in a flash that this was the person who could bring her husband back to life. She rowed the boat to the bank and asked the lady (Netidhopani) to teach her the verses. This lady was instrumental in bring back Lakhindari . In fact Behula reached heaven from this Ghat.

Today this watchtower offers one a view of the ruins of a 400 year old Shiva Temple, popularly called the Netidhopani Temple. It is also believed that there is a road on the extreme right of the forest which was built by King Pratapaditya to guard the coastal area. It is now covered with earth. A lot of archaeological finds, mainly terracotta wares have been found in and around the Netidhopani Temple and are displayed as specimens at Netidhopani. There is also a sweet water pond at Netidhopani. This watch tower has a capacity to host 20 persons at a time. The serenity of the Netidhopani Watch Tower is worth enjoying.

Q: How can Netidhopani be reached ?

Q:  What are the stay options at Netidhopani ?

A:  Netidhopani does not have any  overnight stay option. Tourists are allowed to stay only till 16:00 hrs. Thereafter they have to leave the camp and the forest area

Q:  Who issues the Netidhopani Permission ?

A:  Netidhopani permission is issued by the Sundarban Tiger Reserve authorities from the Sajnakhali Eco Tourism Range. Anyone who wants to undertake a Netidhopani Tour, has to obtain the requisite permission.

Q:  Is there a limit to the number of boats or launches visiting Netidhopani ?

A:  Yes, only 12 boats/launches are granted permission to visit the Netidhopani watch Tower every day. These permissions are not issued in advance and are issued on first come first serve basis only on the day of travel.

Q:  When Is The Best Time To Visit Netidhopani ?

A:  Netidhopani is accessible sailing through wide rivers and some very beautiful creeks.The rivers turn choppy from April till September.So the best time to visit Netidhopani is from October till March
SEND ENQUIRY FOR : SUNDARBAN DAY T0UR