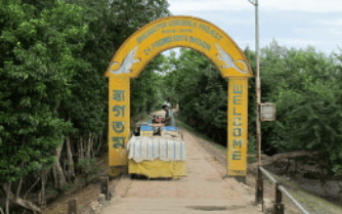 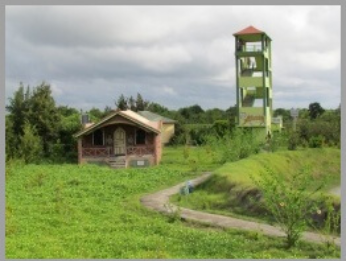 The Bhagabatpur Crocodile Project in the South 24 Parganas Division Forest has, of late, emerged as an important tourist destination of the Sundarbans. This is the only crocodile project in West Bengal and is located adjacent to the Lothian Island and on the bank of the Saptamukhi Estuary.

The dense mangrove forest at the confluence of Saptamukhi river system has immense natural beauty to attract tourist all throughout the year. This hatchery is of the of estuarine crocodile as well as of the Batagur Baska species of tortoise. The Bhagabatpur Crocodile Project involves with the incubation of crocodile eggs, nurturing them, growing them to the desired age and then release them into the wild.

The Bhagabatpur Crocodile project has crocodiles of varying ages. Though this place is easily accessible through Namkhana, one can also visit it from Sajnekhali.

The Bhagabatpur crocodile Project is often visited first by those who approach Bonnie camp or the Kalash camp from the Namkhana or the Ramganga side. One often also passes through the Lothian Wildlife sanctuary as well as the Haliday Wildlife Sanctuary.

Bonnie Camp can be reached from Bhagabatpur in around 3 hrs and the Kalash Island in around 4:00 hrs.